In recent new, Jerry Yang, CEO of Yahoo,has just announced that he is stepping down. Yang said he would continue his duties until the board announced his successor. He also agreed to assist in the process for finding his replaceent. Finally, Yang said he would continue to work for Yahoo and return to his previous job as “chief Yahoo,” a corporate strategy role in addition to remaining on the board. Yang was in control of Yahoo for about a year and a half.

The decision is said to have been mutual between Yang and the board. Although the board was grateful to Jerry’s contributions over the past year and half, they are looking for someone to take the company to the next level.

Ross Sandler, analyst at RBS Capital Markets, saw this change as a positive decision from what he calls a “shareholders perspective.” He said Yang did little to restore confidence in any of Yahoo’s shareholders, employees or customers after botching the Microsoft deal. In February, Yang refused to accept Microsoft‘s bid of $31 a share. He attempted to show some willingness to sell the company but at a much higher price Microsoft was not willing to pay. Due to this, Microsoft rescinded its offer in May.

Yang attempted to develop a plan to help Yahoo compete against Google. He made several cuts in the staff and planned to lay off at least 10% of its 15,000 employees. During the time that this was stated, Yahoo’s net income fell 64% and lowered its revenue projections for the year. Yang made an advertising deal with its rival Google. The deal was supposed to bring Yahoo $250-$450 million in additional cash flow for the first year. Under pressure from regulators over antitrust concersn Google backed out of the deal. Since this deal fell through, many analysts have stated that yahoo might be forced to consider a deal with Microsoft or a merger with AOL. Who know’s what is in store for Yahoo in the near future. 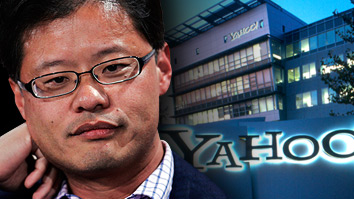 Althouh Jerry Yang seemed very dedicated to the Yahoo corporation, his ability to take Yahoo to the next level did not go as expected. Although he dissapointed the board, he is at least sticking to his company and continuing to support it despite his job situation. As Yang most recently stated, “i have always, and will always bleed purple(in reference to Yahoo’s corporate color).”